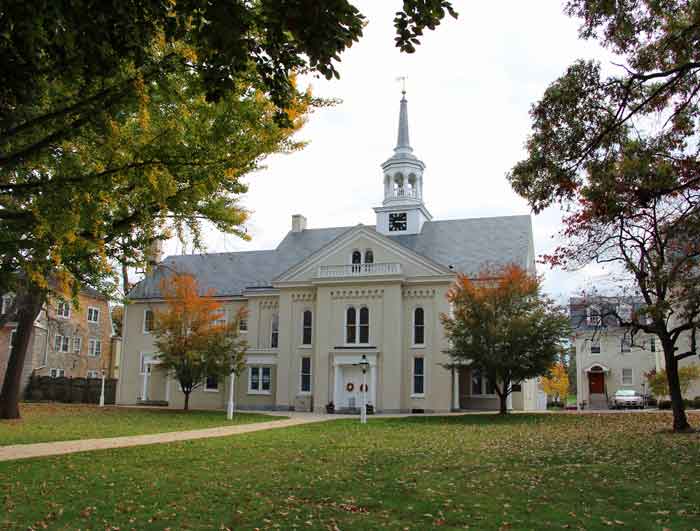 When you travel in Europe and throughout the world few things are more exciting than seeing places of worship that were built hundreds, sometimes even thousands, of years ago by people who were invested in their faith and worked meticulously to build elegant churches, mosques and temples that are still standing today.

While Lancaster County can not boast churches thousands of years old, visiting these historic places of worship is reminiscent of the time when they were first built. In the early days of the state, when the settlers of Pennsylvania lived on little more than faith, they built churches with the skills they knew that have lasted for more than 250 years. The architecture and history of these beautiful buildings make them great places to see whether you are attending for services or merely enjoying the value of the old buildings.

Lititz Moravian Church – The basis for the founding of an entire town that is now home to more than 10,000 people, the Lititz Moravian Church was organized in 1749. Built in what is known as a “prophetic style,” the present church building was constructed in 1787 though it was later maimed by fire and carefully restored. Tours of the church are available.

St. Mary’s of Lancaster – Originally founded by two German Jesuits, this church building has gone through many incarnations being destroyed by fire, torn down to make room for progress, and finally rebuilt beginning in 1881. Over the nine years between 1888 and 1897 the memorial stained glass windows were added giving the final touch to the church that still stands today.

Bangor Episcopal Church in Churchtown – Founded by a group of Welsh immigrants and named after a church in their home country, the original church on this site was built in 1720 of logs. After more than one hundred years the current building was built there out of stone in a gothic style with a steeply pitched slate roof and tall pointed steeple. It was completed in 1830 and though it has seen some improvements over the years it remains much the same as it was over 175 years ago.

Donegal Presbyterian Church Complex – Originally built in 1732, this church has only undergone a little remodeling since that time. Other buildings in the complex were added later on included a chapel and a study house that were built by the 1850’s and later restored. At this church in 1777, when George Washington and his men were retreating at Chadd’s Ford in Delaware County, the congregants at the Donegal Presbyterian Church rallied around an oak tree outside the church to pledge their allegiance to the patriot cause. Though the tree itself is gone a marker still stands there and the church itself is an intriguing piece of Lancaster County history.

First Reformed Church, United Church of Christ – In 1736, downtown Lancaster was a woodland.  Orange Street was a dirt path, King Street was a wagon path and only 200 people lived in Lancaster city. There were a couple houses that dotted the landscape downtown, and a little log church sat, nestled in the woods.  In 2021, Lancaster is Pennsylvania’s eighth biggest city. Orange Street and King Street are lined up and down with buildings, apartments and businesses. And what was once that little log church is now a brick building — First Reformed Church, United Church of Christ, 40 E. Orange St.  Despite the major changes Lancaster has seen over the past 285 years, the plot of land that the church is on has solely been used for religious purposes since the log church was built in 1736.  Church historian Jim Chryst says that the land was rented until 1741, when lawyer and future politician James Hamilton executed a deed granting the property to the congregation.

If you care to explore more than one of these beautiful historic churches, consider extending your visit in Lancaster County and coming to stay with us! The Lancaster County Bed and Breakfast Inns Association will help you find the perfect guest room for you in one of many inns all across Lancaster County so that you can be comfortable and relaxed but still close to the sites you came to see!